Grazyna Kwapiszewska is a professor at the Institute for Lung Health (ILH) of Justus Liebig University (JLU) in Giessen, Germany, where she leads the research group “Aberrant Remodeling and Regeneration in Chronic Lung Diseases.” She is also the director of Ludwig Boltzmann Institute for Lung Vascular Research (LBI-LVR) in Graz, Austria and Associated Professor for “Vascular Remodeling” at the Department of Physiology, Medical University of Graz, Austria. She is also a speaker of the Austrian Science Fund (FWF) funded graduate school Immune Modulation in Respiratory Diseases (RespImmun).

Grazyna Kwapiszewska was born in Poland. After receiving her Masters (MSc) in Biotechnology from Adam Mickiewicz University, Poznan, Poland she moved to Germany and finished her PhD and postdoctoral training at the Graduate Program Molecular Biology and Medicine of the Lung (MBML) and Pathology/Internal Medicine Department of the JLU.  From 2005 she served as teaching associate and later as deputy director of Graduate Program MBML. In 2008 she was appointed as a faculty member at the University of Giessen and Marburg Lung Center (UGMLC), Giessen, Germany.  In 2011, she moved to Graz, Austria, to run an independent research group and served as deputy director of LBI-LVR. In 2015 she has habilitated in Molecular Pathology at the Medical University of Graz. From 2017 she became the director of LBI-LVR, and in 2020 received an endowed professorship at the Department of Physiology, Medical University of Graz. Dr. Kwapiszewska is on the editorial board of several journals including: AJRCMB, AJP-Lung, and AJP-Cell Physiology and is serving as a reviewer of numerous funding agencies and scientific articles. She has received several national and international awards for her scientific accomplishments. She has published 105 research articles (Date: Sept. 2021) in well-renowned scientific journals, including: Circulation, Circulation Research, American Journal of Respiratory and Critical Care Medicine, European Respiratory Journal, Nature Communications, American Journal of Molecular and Cellular Biology, and American Journal of Physiology-Lung.

Scientific Program of the Professorship

Pulmonary vascular diseases have multifactorial pathobiology, characterized by aberrant phenotypes of endothelium, smooth muscle cells and adventitial fibroblasts. These pathologic changes cause remodeling of the pulmonary arteries (PAs) not only in the idiopathic form of pulmonary arterial hypertension (PAH), but also in chronic lung diseases (CLD). The Kwapiszewska team has deciphered several molecular and cellular mechanisms underlying the pathobiology of pulmonary vascular remodeling in different forms of CLD associated to pulmonary hypertension (PH). We discovered dysregulation in the extracellular matrix and basement membrane composition of the PAs of CLD-PH patients. Furthermore, we identified transcription factors, which - in a compartment-specific manner - lead to the abnormal proliferation of lung vascular cells and their interaction with immunomodulatory processes.

The Kwapiszewska team focuses on the “vascular point of view on chronic lung diseases”. Chronic Lung Diseases (CLDs), such as COPD and pulmonary fibrosis, are an increasing cause of death in the aging population. As vascular involvement in these diseases worsens patient outcome, our team aims to unravel the compartment-specific role of mesenchymal cells/disturbance of basement components and their interaction with immune processes in the pathobiology of CLD and their vascular abnormalities. Based on our previous experience with lineage tracing technology, single-cell analysis and multi-color fluorescent microscopy to dissect the heterogeneity of the lung vascular abnormalities, we aim to extend these methodological approaches to characterize the cellular and molecular mechanisms leading to the formation and progression of vascular lesions in the context of CLD, as well as non-resolving parenchymal abnormalities post pneumonia/ARDS. The role of basement membrane and basement membrane-derived matrikines in these pathogenetic sequelae will be particularly addressed. In a translational aspect, we aim to identify new vascular biomarkers predicting patients’ outcome and to identify and verify novel treatment approaches derived from the “vascular point of view” of these diseases, as depicted in the subsequent figure: 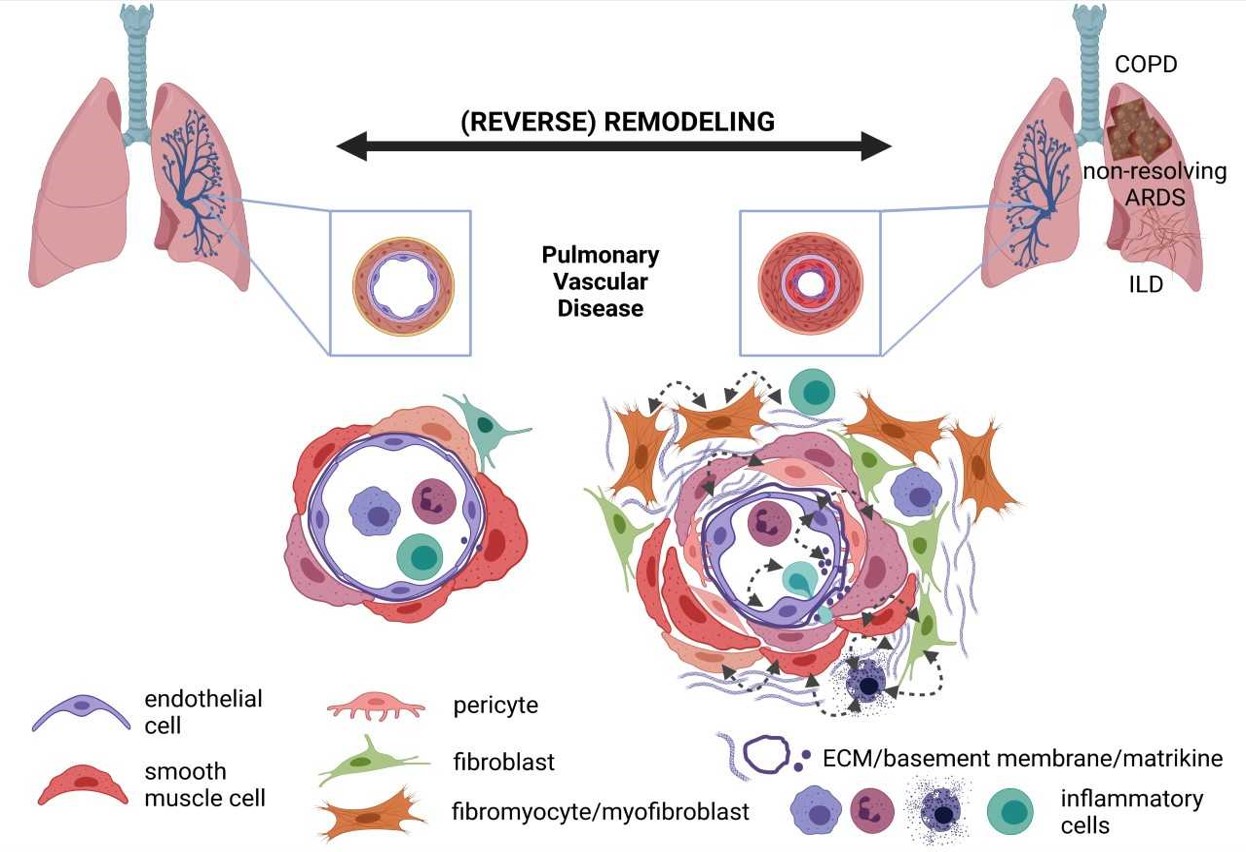 The following goals will be addressed:

Heterogeneity of the cellular components in the pulmonary vascular wall and their role in CLD initiation/progression and associated vascular abnormalities: