Miguel A. Alejandre Alcázar is clinician-scientist, specialised in pediatric and adolescent medicine, and head of the junior research group Perinatal Lung Health and Chronic Disease at the Institute for Lung Health (ILH), Justus Liebig University Giessen (JLU), Germany. In addition, he is appointed assistant professor (with tenure track) for Translational Experimental Pediatrics at the University of Cologne and is heading the translational research unit Experimental Pediatrics at the Department of Pediatric and Adolescent Medicine, University Hospital Cologne.

Miguel A. Alejandre Alcázar has a spanish background and grew up in Germany. After successful graduation from medical school and completion of his doctoral thesis (M.D.) with a special focus on the pathogenesis of bronchopulmonary dysplasia (BPD) at the Justus Liebig University of Giessen, he started his residency in the field of paediatrics and adolescent medicine at the University Hospital of Erlangen in 2006. He moved to the University of Cologne in 2010, to continue his research in perinatal lung injury as a result of intrauterine growth restriction in the Interdisciplinary Programme for Molecular Medicine (IPMM) at the Centre of Molecular Medicine Cologne (CMMC), where he earned his Ph.D. in 2012. He then joined the Rabinovitch/Bland laboratory at the Department of Pediatrics at Stanford University with the support of a DFG grant, and investigated novel therapeutic strategies for ventilator-induced neonatal lung disease. In 2016, Miguel A. Alejandre Alcázar was appointed assistant professor for Translational Experimental Paediatrics at the University of Cologne and has since then headed the research unit Experimental Pneumology at the Department of Pediatrics, University Hospital Cologne. Moreover, he is investigator at the CMMC and associated researcher at the Cologne Excellence cluster on Cellular stress responses in Aging associated Diseases (CECAD), University of Cologne. He also serves as a member of the Editorial Board of the American Journal of Physiology - Lung Cellular and Molecular Physiology. Dr. Alejandre Alcázar received several national and international awards for his scientific accomplishments. He published 41 research articles in well-renowned scientific journals such as American Journal of Respiratory and Cell and Molecular Biology, The FASEB Journal, Clinical Science, Journal of Molecular Medicine, and American Journal of Physiology and Lung Cellular and Molecular Physiology.

Chronic diseases of the respiratory tract and lungs are among the main causes of death in adults and children worldwide and thus represent an increasing individual as well as socio-economic burden. The pathogenesis, diagnostic procedures and therapeutic approaches of chronic lung diseases, such as chronic obstructive pulmonary disease (COPD), idiopathic pulmonary fibrosis (IPF) and pulmonary arterial hypertension (PAH), have been extensively studied in the last decades. However, it is not yet understood why some individuals have a higher susceptibility to chronic lung disease than others. The concept of Perinatal Programming, or Developmental Origins of Health and Disease (DOHaD), states that influences in the critical phase of development can determine the structure and function of an organ in the long term, in part through epigenetic modifications. Since lung development continues beyond birth, the lung is particularly vulnerable to external influences during the antenatal, perinatal and postnatal period. Those influences include maternal and perinatal malnutrition, metabolic disorders and prematurity. For example, respiratory support such as mechanical ventilation and oxygen supplementation are life-saving treatments for premature infants, but lead to neonatal chronic lung disease that is also known as bronchopulmonary dysplasia (BPD). Lungs of infants with BPD are characterized by alveolar and vascular hypoplasia along with lung matrix remodeling, yielding structural changes similar to those seen in COPD or PAH. Therefore, a deeper understanding of processes of lung development and the identification of critical signaling nodes in perinatal lung injury could offer innovative strategies to preserve perinatal lung health and prevent chronic lung diseases. 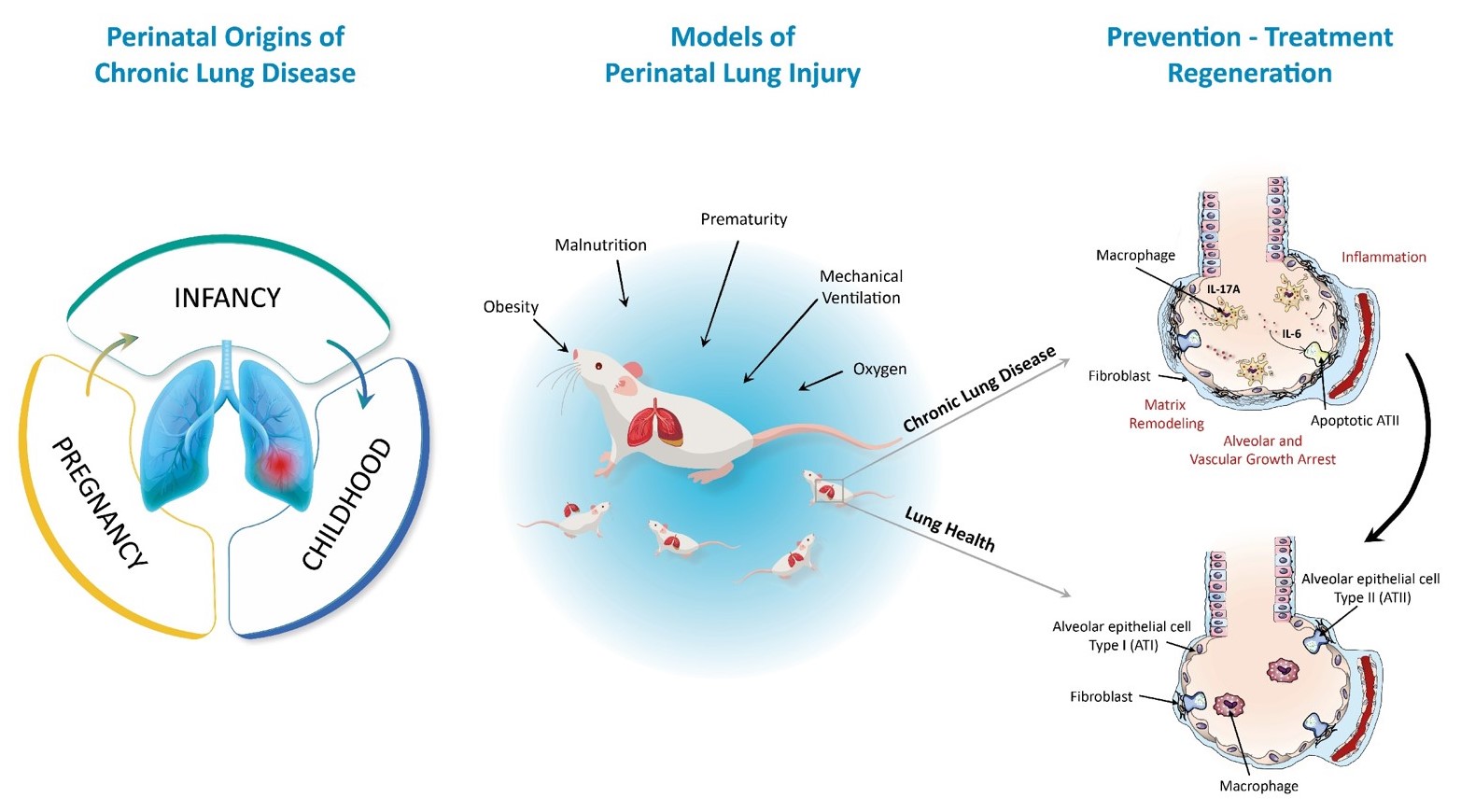 The Alcázar lab is interested in the investigation of the complex regulatory cellular network of inflammatory response, matrix remodeling and alveolar regeneration in perinatal lung development, injury and chronic lung disease. The research group focusses on deciphering the role of monocytes/macrophages, fibroblasts and alveolar epithelial cells type II (ATII) in the perinatal origins of chronic lung disease.

For this purpose, the Alcázar lab established several neonatal animal models, including hyperoxia- and ventilation induced lung injury, intrauterine growth restriction and perinatal obesity, along with transgenc animal models and perinatal therapeutic approaches. These in vivo models are complemented by functional and structural analyses of the lung and ex vivo models (e.g. precision cut lung slices). Based on initial data of transcriptomic and proteomic analyses together with our in vivo findings, the Junior Research group Perinatal Lung Health and Disease pursues the following major aims: